The Chief of Defence Staff, General Lucky Irabor, has said those behind the Owo attacks have been arrested.

The Federal Government, however, said the Islamic States of West Africa Province terrorists were behind the attack.

During a meeting with editors and media executives in Abuja on Tuesday, the Chief of Defence Staff confirmed that the Owo attackers had been nabbed.

Irabor said the suspects would be paraded after an investigation had been concluded into the matter. 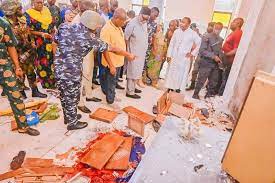